No Weights, No Problem 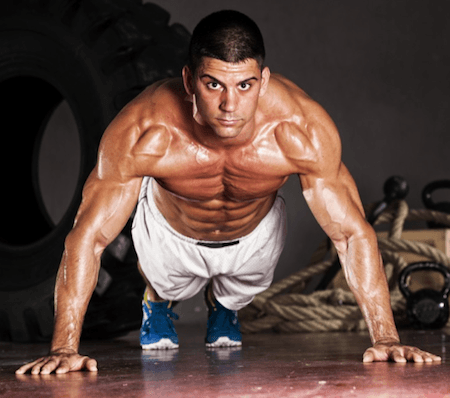 I’ve been an iron-addicted meathead for as long as I can remember. Pushing heavy weights is kinda my thing.

That is until I pushed it too far and got a serious injury. Then another.

And a few more after that. Then, finally, surgery.

It was only when I was forced to, when recovering from rotator cuff surgery after too many years of heavy benching, that I explored the options of training with nothing but my own bodyweight.

Previously I had built my training around squats, deadlifts, presses and Olympic lifts.

Everything else after that was done with bodyweight. But they were referred to as “assistance exericses” and never quite given the same importance of the big lifts, even though they made up for more than 50% of my total training program.

So now, here I was with my arm just out of a sling and I all could do were kneeling pushups and some bodyweight rows from almost a standing position.

I couldn’t put a bar on my back or pick one up either so squats and deadlifts were out. Because of that I started upping the ante on single leg bodyweight only exercises for the lower body.

What Happened From My Bodyweight Only Training Experiment? 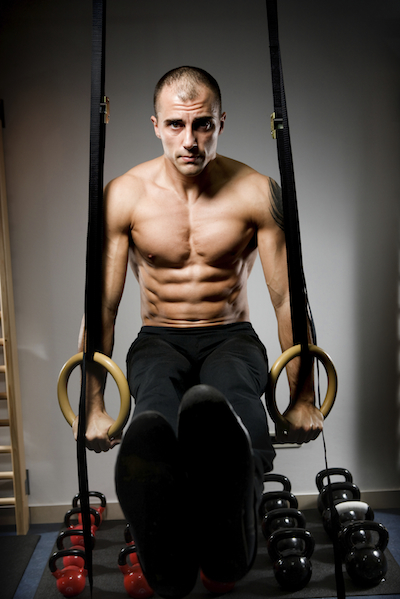 Fast forward to six months later and I felt incredible. Aches and pains that I had for years were gone.

The throbbing shoulder, the achy knees, the stiff lower back… All gone.

I became addicted to bodyweight training and was always continually striving to push the progressions and learn new variations of the movements.

I looked to guys like Herschel Walker and Olympic rings gymnasts for inspiration.

These guys never touch a weight but have physiques most guys would kill for.

Eventually I added weights back in because it’s part of who I am but I’ve never looked at bodyweight training the same since.

To this day I still do at least one or two 60-90 day blocks of purely bodyweight training each year where I don’t touch a weight.

When I was living in the East Village in New York City I trained for an entire summer outside at Tompkins Square Park, where you see many of the YouTube legends performing incredible feats of strength on a regular basis.

I trained along side many of those guys every day that summer, long before YouTube even existed and I never lost an ounce of size or strength by spending that time away from the heavy iron.

In fact, I got leaner and some of my friends even commented that I had gotten bigger as well.

Nowadays, I live within walking distance of Muscle Beach in Santa Monica and make my way over there on a regular basis to train on the rings, chin and dip bars and the climbing ropes and poles.

Training like this keeps me young, lean, athletic and healthy.

Even if you love squats and deadlifts as much as I do you can still benefit from one or two phases per year of pure bodyweight training. It’s a great way to give your spine and joints a break from all the heavy loading.

You’ll also find that you build new muscle in areas that were previously underdeveloped, and your core strength will go through the roof. 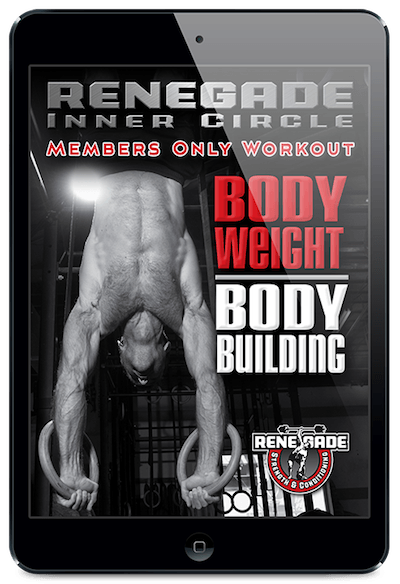 This is the ultimate bodyweight only training program for building functional size, strength and athleticism.

If you’re older and/or beat up from too many years of grinding heavy, back-breaking iron this is the plan for you.

If you train at home in your garage or basement with limited equipment, this is the plan for you.

If it’s summer where you live and you want to get out of the gym for a while this is the plan for you.

If you love weight training but just want to take a break from it for 90 days this is the plan for you.

All you need is a pair of rings or a suspension trainer and few square feet of empty space and you’ve got an absolutely badass workout.

And right now you can get the fully detailed, 90-day Body Weight Body Building Program plus 30 days in my exclusive Renegade Strength Club.

Click the add to cart button below and get ready to feel start feeling better than ever and becoming a functional, athletic badass.