Attention: If You Are Looking For A Way To Generate Mass Targeted Traffic,
Then Read On…

Chances are pretty good that you are having a hard time getting a good amount of targeted traffic to make any of your online campaigns meaningful – correct?

I know how it feels to have trickles of quality traffic come in that converts well, only to wonder about the possibilities if you could get 100x more of the same traffic.

Listen, it is not your fault.

With pay per click costs way out of control, I understand your frustrations with trying to acquire good quality traffic at an affordable price. Your competitors with large targeted email lists (which took years to build) are laughing all the way to the bank, while you struggle to figure out how you are going to generate your next sale or commission.

A few years back, I was making a lot of money promoting cost per action (CPA) offers in a particular niche. I was only doing pay per click marketing at the time and because it was very competitive, there was only so much traffic I could get.

I then stumbled upon a new traffic network and started running the same CPA campaigns.

There was so much of this traffic, I felt I had the world at my fingertips.

So I told my affiliate manager at the CPA network about this new traffic source and he said it was okay as long as it wasn’t adware traffic or they would close my affiliate account.

I was making all this money with CPA offers and was told that CPA networks would not allow this form of traffic or they would ban my account.

I left this traffic source for a few months until I went to an Affiliate Summit conference and started talking with the owners of other CPA networks. They told me that I could send all the adware traffic in the world to their CPA networks, much to my confusion.

They explained to me that adware traffic is in its infancy and most other CPA networks don’t understand it. They see this huge wave of traffic and think you are doing something illegal or wrong.

But the CPA networks who understood this form of targeted traffic basically told me to “bring it on.”

They knew that it would make both of us a lot of money and leave many advertisers happy with the quality leads.

I was back on cloud nine.

I went back to all the adware traffic networks and started sending traffic to the CPA networks that would allow it. Fast forward to today and I don’t know of a single affiliate network that doesn’t allow this form of powerful traffic.

They smartened up and realized that they were leaving a lot of money on the table by not allowing PPV traffic.

Here we are in 2014 and I can say to you that pay per view traffic has helped me pocket millions of dollars in affiliate commissions and products sales. The traffic is as cheap as $0.0002 per full browser impression and has also helped me add tens of thousands of subscribers to my email lists in various niches.

If you are confused at this point exactly what PPV traffic is, I suggest you stop right here and take 20 minutes to read my free comprehensive report at http://www.ppvsumo.com to understand the basics.

I have purchased tens of millions of PPV impressions and one of the things I learned early was to get a virtual private server or a dedicated server because the traffic can come in fast and furious. I have crashed my own dedicated servers many times because it couldn’t handle the number of impressions that PPV networks were sending.

Trust me, this is a good problem to have.

When You Are Generating This Amount Of Traffic,
You Better Have A Good Tracking Solution In Place

One of the biggest struggles I had early on was finding a good tracking solution for this specific form of traffic. Most tracking tools were specifically created for tracking pay per click traffic and didn’t have the features that I needed to effectively run marketing campaigns with PPV traffic.

For example, if I wanted to rotate 10 different landing pages to 10 different offers, I needed a good and robust tracking tool that can tell me what the winning combination is from these 100 possible permutations.

I needed a tracking tool that could easily pass dynamic tokens so that I knew precisely what PPV traffic sources, targets and landing pages were responsible for my profitable campaigns.

There was nothing out there that could do this.

I knew that I needed to have a good tracking solution in place if I wanted to scale my PPV campaigns, so I went out and had it created. I approached a couple of programming friends who basically went to work on creating the ultimate PPV tracking tool based on what I told them I needed.

That is when PPV Dominator was born and this tool alone is responsible for putting more money in my pocket then any online software tool I have ever used. It has made tracking and optimizing my PPV campaigns a breeze and the speed at which I can set up different campaigns is incredible.

PPV Dominator full reporting stats will tell you what optimizations need to be made so that you can turn money losing marketing campaigns into winners.

When I first started running PPV traffic, not many people were buying it and no one in Internet marketing was teaching it. I created a 36 minute video and released it to my inner circle and now PPV is one of the most talked about paid traffic methods online.

Over the last few years, that same 36 minute has morphed into full blown training that I now offer through my PPV Sumo training system.

A training system that I want you to add to your traffic arsenal.

Why You Should Listen To Me About Paid Traffic Generation

You see, I have been online now for 17 years and made millions of dollars by simply buying traffic and sending that traffic through proven marketing funnels. I am a sought after international speaker on this topic and have spoken at some of the most premier Internet marketing events outside my own sold-out traffic events. 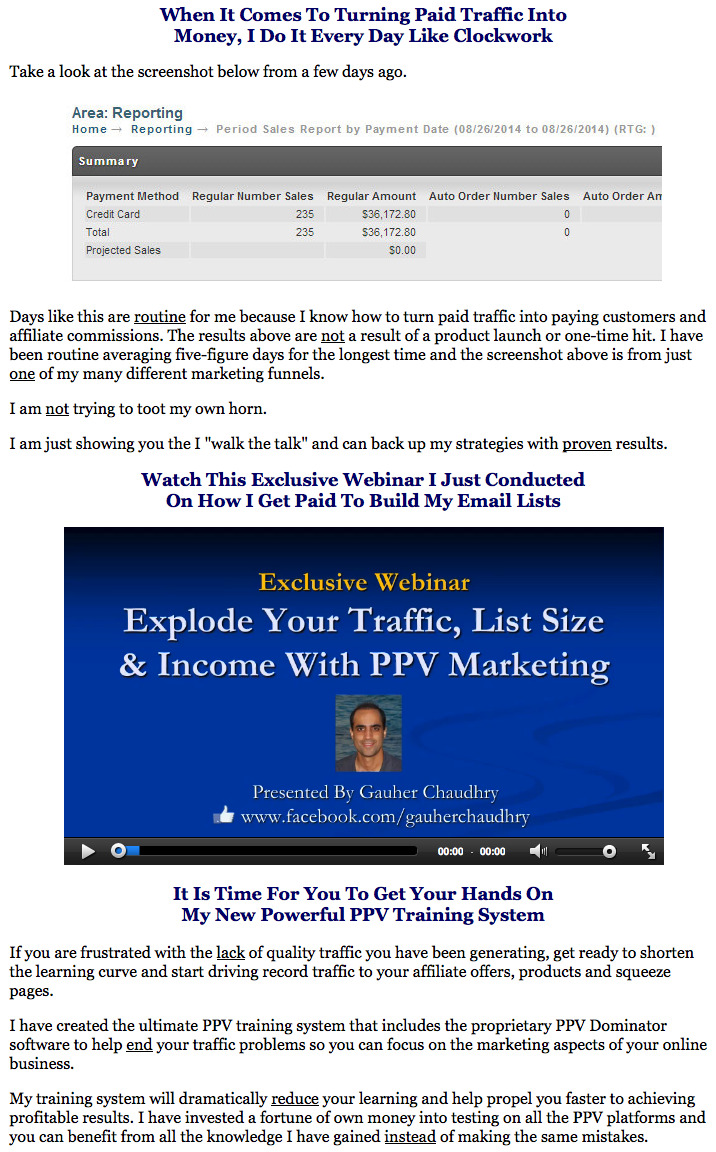